III. In the Community

“The aims of the Takoma Park Horticultural Improvement Club are to promote the culture of flowers and vegetables, to beautify Takoma Park through the improvement of its home grounds, parkings and streets…”  So said its first constitution. 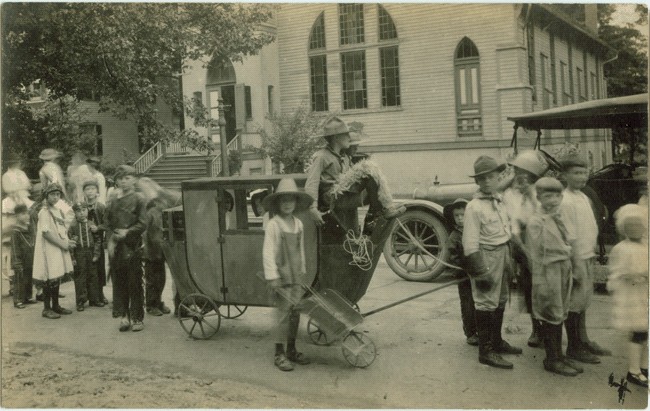 A parade of young people and cars, circa 1925

At the start, the area was known more for its trees than its flowers “for at that time, the larger part of TP was forest trees and the hillsides were covered with wild Azalea, Trailing Arbutus and Birdsfoot Violets. “  In fact, the Club proposed to the Town of Takoma Park that a Forest Warden be appointed (the idea was rejected).  A 1923 THC newsletter says “The problem which confronts most of the members… is how to have flowers, lawns and gardens and still retain our trees… While many of our lesser attractions are the growth of but a year, the trees are the product of an ordinary lifetime, and we should hesitate before sacrificing one of them.”

But the club took its public gardening mission seriously. “Within a year after its establishment, the THC was energetically involved with civic activities in the geographic area… during March of 1917, it agreed to assist the City in securing several small tracts of land on various streets for parks.”  Club programs—cooperative buying of bulbs, plants and soil amendments, plant sales, flower shows, talks, and cash donations for “beautification”— are credited through the decades for the home gardens and parks that mark the city today.  In 1933 and again in 1958 THC helped the Takoma, D.C. P-TA to develop a plot for flowering shrubs and perennials at what is now Takoma Education Campus on Piney Branch Rd. DC, and members donated plants.  In 1993 and 1997 the club donated sums for butterfly gardens were donated to three Takoma Park neighborhood schools.

In the early sixties, the Club gave support to the city’s Azalea Committee in its huge planting effort to bring about “Azalea City”.  Long-time THC member Clarence Casey worked for the City’s Public Works Department, where he rooted and fostered over 15,000 azalea cuttings, which were distributed free to City residents. THC and the City jointly held plant sales and flower shows, particularly azalea shows, and plant sales were held jointly by the City and THC, and club members planted azaleas in their yards.  A 1991 Takoma Voice article on the Club’s Diamond Jubilee proclaimed “Members at the Root of City’s Lush Landscape,” and asked, “Would Takoma Park have the wealth and diversity of azaleas, flowers and other plantings without the THC?  Probably not.”

From 1966 to 1998, the records show cash donations made to Friends of the Thomas Siegler Gardens; Garden Resources of Washington (GROW), which sponsored community food gardens; and $2,000 for a greenhouse at Takoma Park Middle Intermediary School. The Library in DC where the Club was founded also received attention, in gratitude for years of hosting its members and housing its archives.  In 1989, for example, the club arranged for landscaping of the Library’s front space with holly, red maple, shrubs and flowers.  Club member Dorothy Cichello spoke at the dedication of B. Y. Morrison Park in Takoma Junction in October 1992, where “Historic Takoma and the Takoma Park Horticultural Club have made generous donations to acquire two bronze plaques, noting the importance of B. Y. Morrison and the significance of Takoma Junction.” In 1990 the Club planted a red maple at Memorial Park in honor of the Centennial of the City’s incorporation, with a plaque which can still be seen.  Over the last decade, Club also donated thousands of dollars worth of flower bulbs to the City.

This year, at its own Centennial, the Club seeks to carry on the long tradition with commemorative plantings at the corner of Piney Branch Road and Philadelphia Avenue.

Additional notes from the authors

In 1959, members cleared and planted in front of Swartzell Methodist Home for Children (orphanage) 2nd & Sheridan NW. [Archives have a list of plants donated and a hand-drawn sketch of design on yellow paper, which might be an illustration for the article, if one is needed.]

A “lovely little quote” from the 1955 Chrysanthemum Show program:

THC has sponsored this concept with its activities in the Takoma area.

The kiss of the sun for pardon

The song of the bird for mirth

One is nearer God’s heart in a garden

Than any where else on earth.